The CutAway Shader - A free Blender add on for architectural visualisation, model cutaways and more.

After 3 years in the making - I'm excited to announce the alpha release of the CutAway Shader - a free addon for Blender for artists, architects, scientists and engineers.

If you've ever wanted to cut away a cross section of a model, perform an architectural reveal or carry out some tricky special effects then this is the tool for you!

It works for still images and for animations. 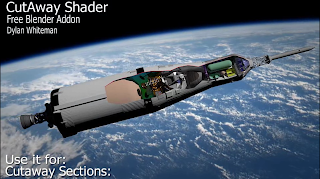 The CutAway Shader can be used for: 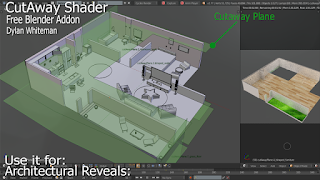 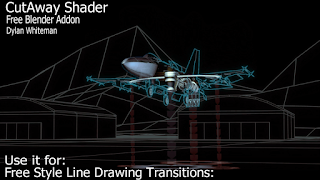 What does it do? 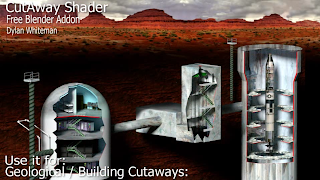 Install the addon in Blender in the usual way.

or just do the following:

How does it work? Executive summary

After finishing the Open Shader language (OSL) Cycles Lens Flare shader a few years ago, I began experimenting with a few more OSL shader designs. The CutAway shader looked like it would be the quickest to finish (!!!) - so I continued with it.

I noticed with the previous Lens Flare shader release that many people did not know how to add the Blender drivers - these are needed to let the Lens Flare shader know the position of the sun (an 'Empty')  in the scene. A custom 'py-node' in front of the Lens Flare OSL shader could have automated this task. (A Blender py-node is a node that runs Python custom code) 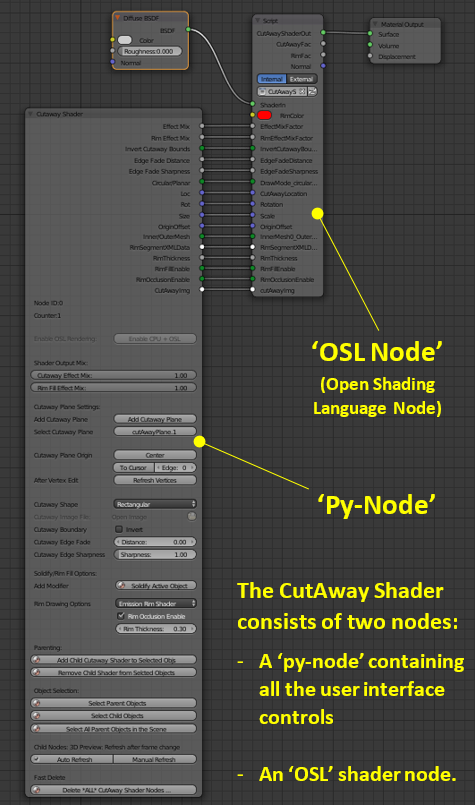 For example, the py-node adds all required drivers automatically. These let the CutAway shader know:

This all took quite a lot of time!

Even so, the bulk of the code was finished over two years ago - however, this was followed by the production of 12 demonstration video scenes and several tutorials.

As I am kept very busy during the day project managing this (and like most people have a very busy home life too) this project has taken  approximately 3 years to get to the alpha release stage.

Initially I imagined the CutAway shader performing the obvious tasks - Model cross section cutaways, geological cutaways and architectural reveals. But I soon became excited about other uses the shader could be put to.

Special effect Revels: The a shader can easily hide materials on one side of the 'cutaway plane' and (optionally) reveal materials on the other.

This type of effect can be seen in the demonstration video in the following scenes:
These 'special effect'  examples can easily be extended to many additional scenarios:

Another interesting use for the CutAway Shader is related to the 3D  pipeline work flow. The shader makes it easy to 'punch' any arbitrary shaped hole through scene elements without affecting the base mesh or U.V mapping. If a client wants to move or add an window to a scene at the last minute - none of the existing mesh or U.V work has to be re-worked. The shader will create the new hole with the desired shape and additional geometry (or existing windows etc) can be moved into place.

If the pipeline involves mesh assets the are frozen (or scene dressings that are locked) then the shader offers a new  method of  hiding (cutting away) assets that are blocking the camera view. This can be achieved without actually moving assets or redressing the scene.

This concept extends to 'filming' through set walls - without affecting a set's internal lighting setup, as the shader can be configured to only cutaway 'camera rays'. (i.e. we can look through 'solid' walls without light leaking into or out of the set!)

Filming through sets can be useful for when the desired framing and depth of field results in a lens size that forces the camera to be placed outside the walls of a small set (e.g. a small bedroom, or small space capsule).

So, the possibilities for the Cutaway Shader are surprisingly large for such a simple concept!

Give it a try!

Let me know what you think in the comments below - or e.mail:  iReboot42 at gmail dot com.

There are many features that could be added to the shader - along with some optimisations. I would like to look at micro displacement of shaded points in the drawn 'rim' to improve this effect.